I’m a filmmaker and a journalist but you probably know that if you’ve got this far.

The four shorts I’ve directed have played in festivals worldwide and received praise from the likes of David Fincher and Mark Romanek. 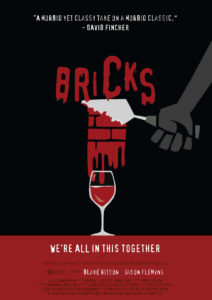 Yeah, I said that on the homepage,
but it makes me happy to repeat it.

I’m attached to a couple of feature films as director – things I’ve either developed, written or co-written –
and also write screenplays on commission. Yes, you too could
Live The Dream and work with me.

I’m also a contributing editor to Empire, the world’s biggest movie magazine. Over the years I’ve written for Esquire, The Guardian and The Daily Telegraph, among others, and appeared on BBC Radio and TV, Sky News and CNN.

My most consistent subject has been David Fincher. I’ve been on
set for each of his productions since Zodiac and you can find most
of the articles here. Some of our chats also feature in the book
David Fincher: Interviews.

If you want to know how I got to this point – maybe you’re considering journalism or employing me or you’re a masochist – then below is the long version of my career so far.

THE LONG VERSION
My first job in journalism was at the North Devon Journal, in the summer of 1997, between years studying journalism at Bournemouth University. I turned up for a week’s work experience… and stayed for three months.

It was a terrific apprenticeship, including everything from court reporting and investigating animal cruelty to writing film reviews and
a front-page scoop on how smoking could, er, kill you.

After graduating (with a 2:1 and all the relevant NCTJ qualifications),
I was elected as Communications Officer of BU Students’ Union.
I spent a year editing its fortnightly paper The Nerve, learning about every aspect of publishing, from advertising to design to how long
the human body can go without sleep when on deadline (58 hours,
in my case).

In 1999, a week of work experience at Total Film lead to my becoming a regular freelance contributor, which continued during my time as production editor on Third Way, the current affairs magazine.

As the dotcom bubble expanded, I joined Popcorn.co.uk as reviews editor and spent a year developing an excellent movie website, watching too many films and wondering how Carlton Communications could continue pouring millions into the web without any plausible hope of a return.

I returned to magazine journalism, contributing to FHM, Uncut and Total Film, before joining the latter as production editor. I spent a great year there, but left after being offered the chance to finally make my parents proud – by taking a job with the BBC.

I joined the corporation as news editor and chief reviewer for the film section of bbc.co.uk, the most popular website in Europe. I wrote daily news reports, a weekly column and reviewed many movies.

Despite having a face for radio, I also provided reviews for the BBC’s then-fledgling interactive TV service and produced and presented online reports from the Cannes Film Festival in 2004. The cameraman is still in therapy.

In September 2004, I returned to Total Film as Reviews Editor, before becoming Deputy and, in July 2006, Editor. During my two-year tenure, I secured several world exclusives, including becoming the only journalist to visit the sets of David Fincher’s Zodiac and The Curious Case Of Benjamin Button.

I also interviewed the likes of Mel Gibson and Brad Pitt and annoyed the market-leading magazine Empire enough to be appointed their Editor-At-Large in 2008. I held that position until 2016, chatting to filmmakers and stars in places as far-flung as Burundi and Cardiff.
I was nominated for PPA Writer Of The Year in 2014 for, among other things, this profile of Hugh Jackman.

I still write for Empire, as a contributing editor, but most of my time is spent on scripts and storyboards and speculating about who to cast.

I wrote my first short film in 2011, Rahab, starring David Oyelowo. Feature work followed, on spec and commission, including most recently co-adapting a major novel for Riverstone Pictures.

In 2015 I directed the short Bricks, an adaptation of an Edgar Allan Poe story, which David Fincher called a “classy take on a morbid classic”.
It won the Melies d’Argent at the Abertoir Film Festival. It was followed by the romantic comedy Ghosted, which starred Alice Lowe and was nominated for the Hitchcock d’Or at the Dinard Film Festival.

The thriller LOCK IN followed – with Lucy Boynton, Nicholas Pinnock and Tim McInnerny – as part of Creative England’s iShorts scheme for the best new British filmmakers.

I have previously served on the jury for the BAFTA Rising Star Award and for nine years was a judge for The Pitch Film Fund. I now help run the Fund and in 2017 directed Promise, from a script by finalist Hannah Lee. It starred Rebecca Callard, Nabil Elouahabi, Lara Sawalha. Never Let Me Go director Mark Romanek called it “superbly done”.

If you’ve got this far then you should probably hire me.